Shares Our Verdict It's Predator One of the greatest soft synths gets a comprehensive makeover and improves in functionality, although the interface is a tad dated. Pros Stunning sound. Ridiculous number of presets. Cons Modulation interface feels 'old'. Manual isn't finished. It's hard to believe that Predator - still Rob Papen's and coding wizard Jon Ayers' most lauded synthesiser - is a decade old. Upon its release in , it blew us away with its almost-single-screen interface, huge selection of waveforms, unrivalled effects and stellar sound. With its considerably expanded architecture, this results in an even busier interface than that of its predecessor. The layout remains perfectly logical and it doesn't take long to learn your way around, certainly, but synthesis novices will have a hard time relating to it - which is where the new Easy Mode comes in Distilling Predator 2 down to just enough parameters for broad-strokes changes, Easy Mode gives beginners and live performers a friendlier, less cluttered environment in which to work. Back to the non-Easy 'Advanced'? Outside that, though, it's a veritable ocean of knobs, between them controlling a great deal of synth In Live mode, the red 'puck' can be dragged around with the mouse or automated in the host DAW. The real fun comes when you switch to Record mode, however, in which your movements are captured to memory as a 'path' for playback in Play mode. The replayed movement of the puck along this path is open to plenty of creative tweaking, including looping, speeding up and slowing down, syncing to host tempo, and quantising to path resolution, background grid and time. Predator 2 is a thoroughly worthy successor to the original and we find ourselves even more in its thrall than we were in It can also be triggered polyphonically each note starts its own path, all of them animated in the display , monophonically one shared path that restarts with each new note or in Free mode one shared path that runs continuously, regardless of note input after the first. 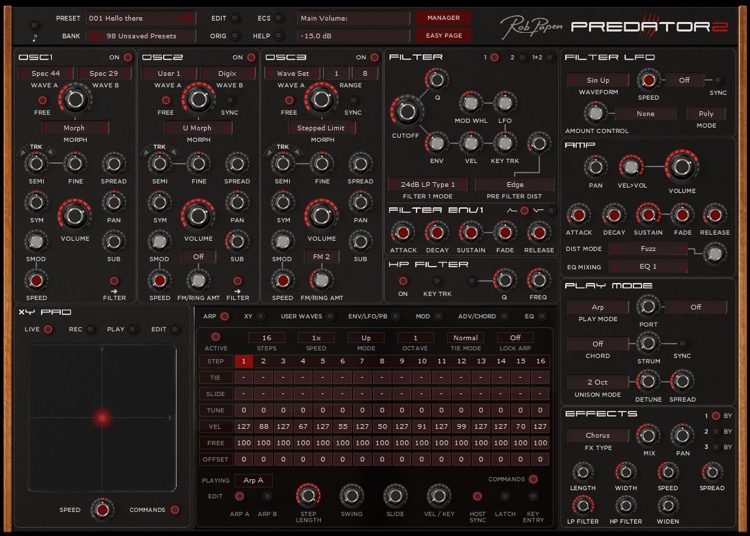